The Ghost of Bothwell Castle 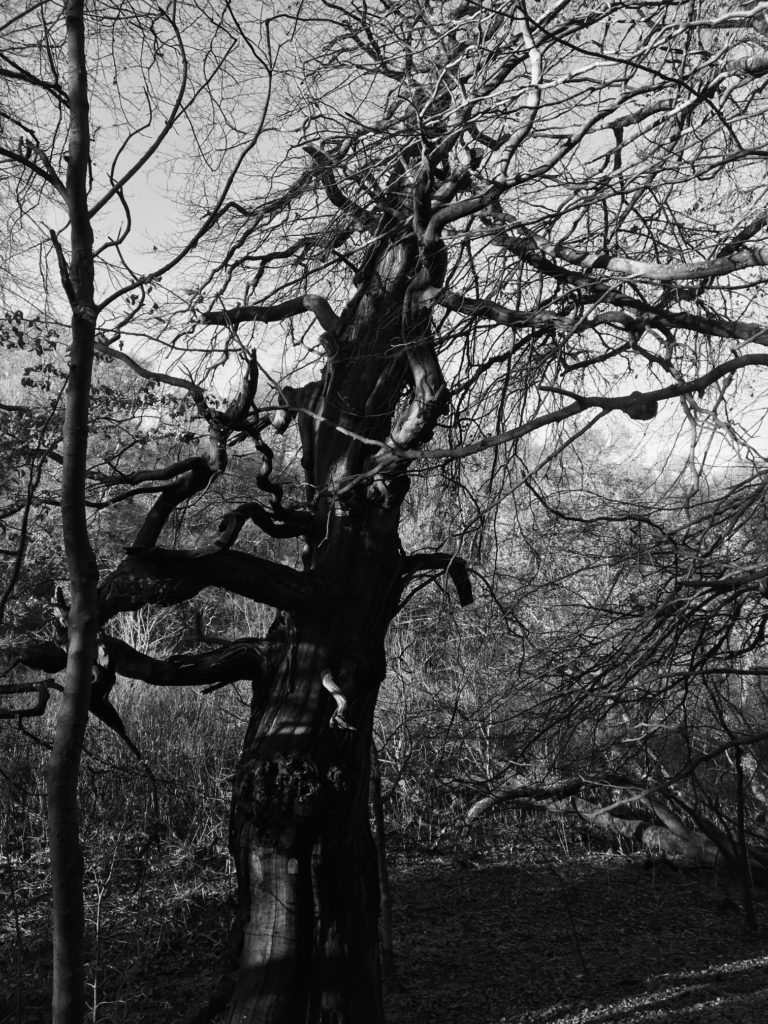 I am not alone. I feel its presence all around. Its icy fingers lightly brush my cheek, enticing and repelling in equal measure. Death. A constant companion. With me, step-by-step, as I march through this natural cathedral. The high, gently-swaying, and fragmented ceiling allows just enough light to reveal the dead and dying all around. In this place of worship, the deceased rest alongside the living, their seat reserved for a never-ending sermon.

Some lie on the ground where they fell, oh so slowly being buried by invisible pallbearers. Others have been caught by mourning relatives, held aloft for decades, cradled by caring boughs, as if refusing to accept the finality of it all. The waning sun has just fallen below the twig-formed cathedral windows when she reveals herself. The ghost. An ancient spirit, unseen by most, she chooses me, of all people, to reach out to. Perhaps she senses my awe and wonderment and enjoys the reminder of an age, long past, when she led this congregation in praise.

I have been illicitly meeting with the Ghost of Bothwell Castle for decades now. Her draw is so powerful that I feel no remorse at leaving the living behind and embracing her realm. She whispers wisdoms that no living companion would: Life and death are one. Entwined and never-ending one cannot be without the other. Concern and fear are follies of the living only. She has taught me much.

Her memory has faded but she reigned the castle and banks of the Clyde for, easily, three-hundred years. This northern kingdom was her home, but not her natural one. A Spanish chestnut (Castanea sativa) she came from a sunnier, gentler, place. Exiled from her natural home she survived, flourished even, though her offspring where too poorly to cope with the harsh Scottish winters. So, she stood proud, imposing, defiant, but ultimately alone until nature finally decided it was time for her to return to the fold. Her spirit was as strong as her tonnes of heartwood and she refused to go, fully, into the next realm.

Now a shadowy figure, lingering by the banks of the river, she persists long after her demise. Determined to be part of the living world, she still sequesters much carbon, holds aloft fungi, mosses, lichen, ferns and invertebrates while sheltering generation after generation of birds and bats; her adopted family are cared for as if they are her own. She slowly, bit-by-bit, sacrifices herself so they may live.

Most are aware of the importance of deadwood in an ecological sense. And few would disagree that ancient woodland is vitally important. Not because of its age, per say, but because of the wide variety of habitat opportunities to be found in close proximity. My ghostly Spanish friend is a prime example of the life giving properties afforded by the arboricultural dead.

Then there is her back-story and impressive architecture. A huge, gnarled bole holds aloft contorted limbs still reaching for sunlight that can be of no more use than to give a temporary warmth to a skeleton’s bones. She has drawn me in and won my heart.

But even though I am, therefore, bias I hope you would agree, this Spanish spirit is worthy of protection. Even in death. But can a dead tree be protected? Perhaps the most mis-quoted arboricultural phrase is “…dead, dying and diseased trees are exempt from TPO protection”. Or perhaps, “…it is dead, so you can fell it”.

We only have ourselves to blame. The underdeveloped Scottish arboricultural industry relies on English based professional qualifications. We do not have Scottish equivalents. When studying for exams, I knew English legislation better than the actual statutory instruments that should have affected my day-to-day conclusions and advice. The dead tree exemption is the classic example. While the “Town and Country Planning Act 1990” (the English act) does indeed contain the wording “… trees which are dying or dead…” the “Town and Country Planning (Scotland) Act 1997” (the Scottish act) does not. Thankfully. “Dying or dead” – weaker wording you are unlikely to find. When does the “dying” process commence? The day those cotyledons poke their head above-ground?

The Scottish act (in Part VII, Special Controls, Chapter 1 Trees, Tree preservation orders 160 (6)) states “…nothing in such an order shall prohibit the uprooting, felling or lopping of trees if – (a) it is urgently necessary in the interests of safety,”.

There is no mention of dying and dead trees. Rather the focus, quite rightly, is on managing unacceptable levels of risk. And yes, we could indeed argue the interpretation of “urgently” until blue-in-the-face. But life in this realm is too short. So, if my Spanish sprite was protected by a tree preservation order prior to her naturally conceived assassination then she still is protected. Surely? Regardless of which realm she now mostly frequents.

Assuming no preservation order is in place, could we legally preserve this already dead tree? Although dead it is, clearly, highly valuable habitat, with a link to the distant past. Bothwell Castle is protected because it is an “Ancient Monument”, but so is my Spanish chestnut; being both ancient and a monument. Why would a natural monument be any less important than a manmade one?

Another striking difference between the Scottish and English acts lies in the “power to make tree preservation orders”. As well as the standalone “…in the interests of amenity…” criteria found in the English act, the Scottish act includes (in Part VII, Special Controls, Chapter 1 Trees, Tree preservation orders 160 (1) (1A) (b)) “that the trees, groups of trees or woodlands are of cultural or historic significance”.

So, the tree worthy of preservation need not provide tangible, or intangible, benefits to the public, it simply could be of great age. Many trees of cultural or historic value are likely to be dying, or dead already, but they can be protected by a local authority. I for one would not hesitate to protect our ancient Spanish visitor and would applaud any tree officer bold enough to apply the Scottish act to an already dead tree. Afterall, in arboricultural terms at least, there is indeed life after death.

Luckily, my secret liaisons with the ghost of Bothwell Castle occur in a national nature reserve. Arguably, when this designation was established, the “Nature Conservation (Scotland) Act 2004” made it an offence to “intentionally or recklessly damage any natural feature”. Again, no mention of “dying or dead”. The final indignity of the chainsaw could only, legally, befall the Ghost of Bothwell Castle (assuming NatureScot would not give consent) if her beheading were deemed to be an “emergency operation” (section 17 subsection 1 (c) of the Act). But even decades after death she remains stable, with one foot firmly in the land-of-theliving; certainly in no more need of an “emergency operation” than I. So, I will continue to visit. Seeking forgiveness for my sins against her brethren and to be reassured that death is only the beginning.