Site clearance work, prior to development, is an attractive revenue stream for many tree surgeons. But care must be taken to ensure you’re not getting involved in something inappropriate and potentially illegal.  Tree felling without permission is surprisingly common, several cases seem to make the news each year. Felling of pine woodland at Carrbridge has been well reported recently, mainly due to the involvement of a Scottish minister and the lack of any “permission”.

Given Forestry and Land Scotland state, “everyone involved in tree felling is responsible for ensuring that permission is in place before carrying out any work. Felling without a valid Felling Permission (where exemptions, directions, or notices do not apply) is an offence which, upon conviction, may result in a fine and a criminal record for anyone involved”, it would be unwise to start work until written evidence is produced that appropriate permission has been granted. Equally, it is important to know when permission is not required.

In practicality little has changed but there are some significant changes that could catch us out, if we’re not up to speed.

An important change here is the woodland type. The five cubic metre volume exemption does not apply to Caledonian Pinewoods or any trees in native woodlands (woodland consisting of 50%, or more, native species) between 0.1 and 0.5 hectares. The composition of the woodland may need careful consideration from now on.

Trees below 100mm DBH (that’s diameter at 1.3 metres not 1.5 metres) are exempt as are thinning operations that are part of a management plan or felling as part of a forest plan.

Trees within burial grounds, orchards, gardens, churchyards, or public open spaces are exempt from the need to gain felling permission. Again, care is needed here. Open spaces are defined as “an area designed and maintained for use by the public, including but not limited to, parks, public gardens, areas of grass maintained for sport or recreation, a footway or footpath…”.

Importantly open spaces will not include any stands of trees which have a canopy cover greater than 20% within an area of 0.1 hectares or greater. In other words, if you have an area of 1000m² (or more) and a fifth (or more) of the land is under tree canopy then it does not qualify as an open space.

Perhaps for tree surgeons the most important changes to exemptions include:

Dead trees: They must be completely dead. Trees that are starting to die or are blown over are not exempt. So, be careful not to sever windblown trees without permission.

Unsafe trees: A tree where necessary for the prevention of immediate danger to persons or property. It would be prudent to take photographs and collect witness testimonies prior to felling a tree that you feel poses an “immediate” danger, given we are in the realms of subjectivity.

Dutch elm disease: Trees of the genus Ulmus (elm) affected by Dutch elm disease and where the greater part of the crown is dead. Again, photos and testimonies may be a good idea.

Planning permission: Trees where the felling is immediately required for the purposes of carrying out development authorised by planning permission. This is an important and relevant exemption. When commissioned to carry out a site clearance, and assuming no felling permission has been granted, it would be sensible to view the planning permission documentation, including planning conditions and relating site plans. I’m not sure what constitutes “immediately” required felling but in my experience developers generally don’t hang around and felling is likely to be just before the concrete is laid. Just be careful you haven’t been asked to fell trees that are part of the next “phase” of construction; sites are often developed in phases/stages. The next phase may not have planning permission and may not be deemed to be “immediately” required.

Tree preservation orders: Where the felling is carried out in accordance with the consent of the planning authority, following referral. It is hard to conceive when this will be become relevant. The planning authority will have had to have granted consent to fell TPO’d trees/woodland, after receiving an application for work.

Statutory undertakings: A tree felled by, or at the request of, a statutory undertaker, on land occupied by a statutory undertaker, which is obstructing construction or interfering with the maintenance of their work. Roads authorities can fell trees to “ensure the safety and convenience of road users”, under the Roads (Scotland) Act 1984. Tree removal by local authorities under the Flood Risk Management (Scotland) Act 2009, work by Scottish Water to maintain water supplies, trees interfering with aerodromes, etc are mentioned as exemptions also.

Land and Forestry Scotland have various legal powers to deal with illegal tree felling. They can issue a “restocking notice” regardless of whether they prosecute, or not. Of course, you may also be fined. Fines have doubled from £2’500 to £5’000 “per offence”. Given “… an offence is committed in respect of each tree felled…” that site clearance job could become very costly indeed. Don’t forget we are talking about criminal legislation and those “involved” may end up with a criminal record.  Think of the negative publicity and the financial affect that could have on an arboricultural business.

Even without delving into the morality of felling woodland illegally, it is clear it would be better to simply walk away from a site clearance job than to become embroiled in a prosecution. More details on felling permissions can be viewed at: https://forestry.gov.scot/support-regulations/felling-permissions 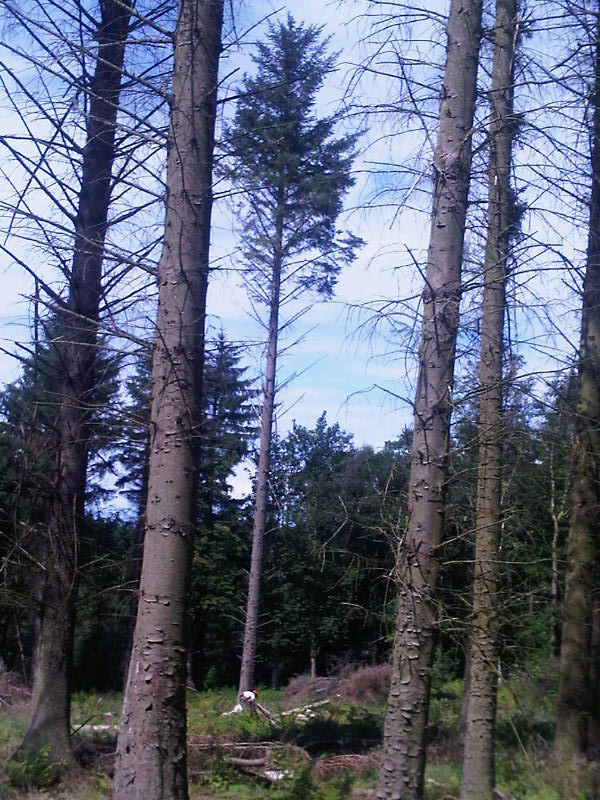