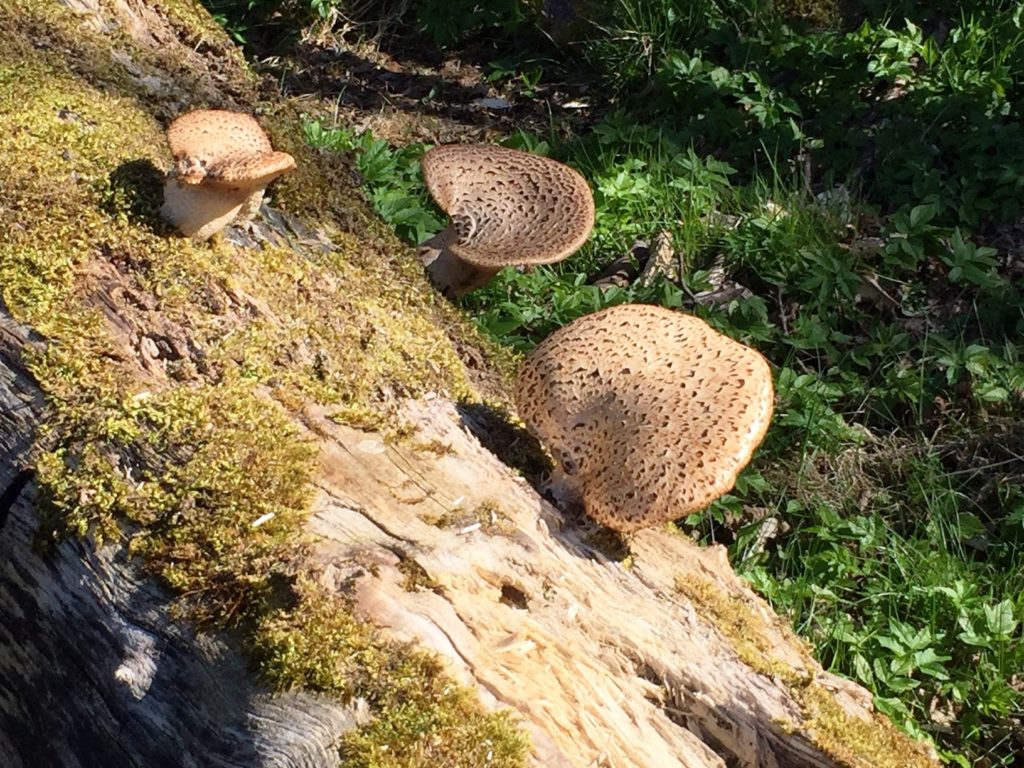 Bird song fills the still air. Blackthorn blossom brightens the distant landscape. The sun, at last, has gained the strength to pleasantly warm upturned faces. Spring is here with its annual promise of summer joys to follow. Naturally, my spirits are lifted but the final cue to rejoice is spotting my old speckled friend, dryad’s saddle (Cerioporus squamosus). The gloriously golden, rapidly expanding brackets of this ubiquitous wood munching fungus are a sure sign that the hardships of winter are all but behind us. It is the 13th April. Those living at our latitude have been known to be working in sleet and snow at the same juncture. This year however the blue sky doesn’t threaten such unpleasantries. Rather, the unusually conspicuous sun coaxes the wild garlic (Allium ursinum) to burst forth and rewards the wood anemones (Anemone nemorosa) for their early start. With a spring in the step and the smell of garlic in the nostrils I head home, where thoughts turn to my old friend once more.

Pic1: “The start of summer is marked by the emergence of dryad’s saddle brackets”
Given dryad’s saddle’s distinctive shape and size, there is no surprise that it is one of the first wood decay fungi many arborists learn to recognise. The non perennial brackets are often found in clusters. Like commuters bustling for space on the ‘clockwork orange’ they often overlap and press against each other. Their short stocky stems curve to support broad brackets festooned on the upper side by upturned brown scales, like the tips of Arabian shoes. Magnolia coloured undersides display long pores that don’t require magnification to be clearly seen. The crowd, like at any party, contains some modest specimens that might expand to the size of a side-plate but they are in the shade of the show-off revellers that rapidly expand to platter sized proportions. Then there are the shy, retiring types that hide in the kitchen – or within cavities when no kitchen is available. A tree spirit (‘dryad’) couldn’t hope to find a better perch to watch the world pass by; ‘saddle’ is indeed an appropriately illustrative name for this bracket. A distinctive fructification indeed. Careful though. Our disappointingly rain-soaked summers can result in bleached (near white) brackets where the scales are far from obvious. Smell can help. Degraded brackets and decayed cavities have, to my nose, a distinct burnt smell. Think of a recently doused camp-fire.
Look high, not low. Pruning wounds and exposed sapwood are gratefully colonised. If you are lucky the brackets with a south facing aspect might be sun-dried enough to persist throughout the winter. 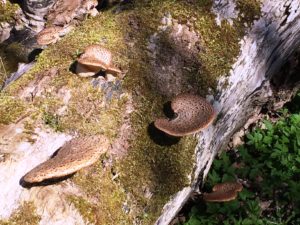 Pic2: “Often clustered together the golden brackets are very distinctive.”
What have I learned about my very photogenic friend over the years? Well, dryad’s saddle is not a fussy tenant. Most broadleaved tree species will provide suitable accommodation, thanks. Probably most commonly observed on sycamore, our versatile friend is often seen sprouting from common lime, horse chestnut, Norway maple, oak, common ash, beech, elm and so on.
Not fussy then about the host tree. And not fussy about what it eats. A simultaneous white rot that degrades and consumes structural carbohydrates from lignin and cellulose at relatively equal rates, dryad’s saddle does however differ from some other simultaneous white rots. Tinder fungus (Fomes fomentarius) shares this decay mode but rarely, if ever, fully consumes the lignin, or the cellulose. Dryad’s saddle appears to leave very little behind, at times resulting in open cavities or hollowed stems. Shaggy bracket (Inonotus hispidus) appears to be the closest to the decay
mode of dryad’s saddle but I’ve found the ash, apple and walnut stems decayed by shaggy bracket to have very centralised voids with largely intact residual walls; intense but contained. Failed stems, colonised by dryad’s saddle, often seem to display widespread advanced decay – not necessarily hollow – that has breached the tree’s barrier zone.

Befriend dryad’s saddle and it will rarely stand you up. A frequent flusher, certainly, but not an annual. ‘Annual’ seems to be an accepted term used to describe some wood decay fungi. But they are not annuals, they are non perennial. Dryad’s saddle can refuse to show itself but is far more gregarious than the shy chicken of the woods (Laetiporus sulphureus) which may refuse to expend the energy involved in producing a bracket for many, many years. To imply that fruiting bodies of dryad’s saddle, chicken of the woods, shaggy bracket and so on will be on show every year
is dangerously misleading. Dryad’s saddle sets a fine example to other wood decay fungi. Here is how to be successful: Flush early in the year and produce spores for many weeks, or months.
Colonise those pruning wounds and fracture sites manufactured during the winter. Have a second flush later in the summer/early autumn; just to be sure. Don’t be fussy about where you live, have a large range of susceptible hosts and don’t restrict yourself to standing trees, any stump or log will provide temporary accommodation just nicely. Eat everything on offer but stay local, don’t try too hard to spread along the vertical. Position yourself high above the ground and avoid those that would happily eat your saddle. In saying that, slugs and snails seem to seek out the brackets – like heat-seeking missiles locked on to a stationary target. Okay, so a very slow missile but our friend cannot get out of the way. Look for those tell-tale slime trails, on the tree trunk and bracket surface. Unwitting vectors, spreading our friend’s spores?

Clearly an intrinsic part of the woodland’s ecosystem but can we tolerate dryad’s  saddle when it has the misfortune of colonising urban trees? Well, every situation needs to be carefully considered based on all the unique relevant factors. You know the typical considerations: size of part, features below or close to the tree, vitality of the host tree, extent of decay, loading exerted on the decayed part, etc. What I can say for sure is that dryad’s saddle creates such intense localised decay that structural failure is highly likely, eventually. The ‘blazing saddles’ that cheered my day where perched on a stem that had fallen some 10 metres from a roadside veteran sycamore. A sizeable structure that luckily had not caused any damage or harm.

So, I’ve learned not be too alarmed when my hazard management exploits are being watched by a dryad perched on a saddle but also to treat this ravenous arboricultural tenant with the respect and gratitude it deserves. Gratitude for its vibrancy and for the confirmation that the rigors of winter are behind us.